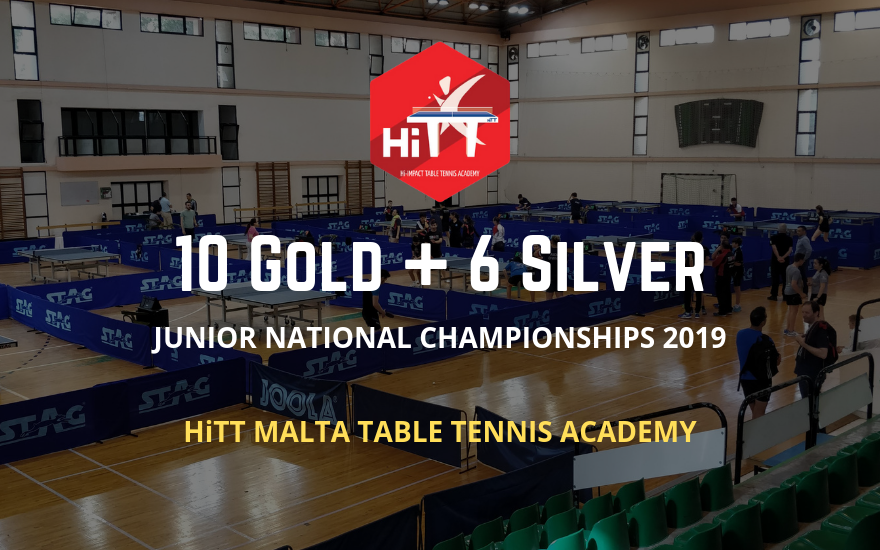 The 2019 edition of the MTTA Malta Junior National Championships of table tennis was held between Friday 26th April and Monday 29th April (with the exception of the U21 Mixed Doubles final which was played on Saturday 4th May).

After last year’s massive success, here at HiTT we knew it would be a hard act to follow, considering also how many of our players are right now in the middle of important academic examinations, with quite a number of them not being able to take part. But with strong determination, team effort and lots of passion, we did it again!

A well deserved round of applause to all our players who worked hard and played amazingly well throughout the championships. It was great to see players supporting each other whatever the outcome, warming up and training together and assisting during matches.

Here’s a breakdown of all the titles we won.

HiTT Academy players secured both medals in the U13 Boys Singles, with Luke Bonello in 1st place and Jake Darmanin in 2nd after an incredible final.

In the Under 13 Boys Doubles, Luke Bonello & Jake Darmanin placed in 2nd place.

8yr old Ben Bonello got 2nd place in U11 also on Friday. Ben was competing for the first time together with two other HiTT players, Jacob Cilia and Alejander Grima, who also gave really good performances.

Jake Darmanin won the Plate Event of the U15 Boys singles.

Day 3 of the MTTA Junior National Championships saw more HiTT players claiming very important titles. The U18 Boys Singles event was won by Sean Debono who played 2 terrific games, first beating James Vella Vidal in the semis and then Conrad Puli in the final to be crowned U18 National Champion.

Then in the U18 Boys Doubles Sean Debono & Luke Bonello played an electrifying final that was tense till the very last ball, finally beating James Vella Vidal & Conrad Puli 3-2 to grab the gold medal. In the U18 Boys Singles Plate Event, Jake Darmanin grabbed the silver medal after fighting his way to the final, where he lost 1-3 to Luke Fenech.

HiTT Academy players were once again protagonists in the U21 Junior National Championships with a series of breathtaking games that led to 4 gold and 1 silver medals, with one category still to be decided.

The next event was the U21 Boys Singles where Gabriel Grixti was crowned champion once again after beating Jurgen Sammut 3-2 in a close final.

In the meantime, Sean Debono secured the 1st place in the U21 Boys Singles Plate with a great win against Aidan Dwight.

In the Girls categories, Sascha Genovese topped the lists and grabbed the gold in the U21 Girls Singles, then she teamed up with May Zahra from Topspin Academy to win the Silver in the U21 Girls Doubles.

In the U21 Mixed Doubles Gabriel Grixti & Sascha Genovese claimed the 1st place.

HiTT Malta Table Tennis Academy as strong as ever

These results are a confirmation that what we’re doing here at HiTT Malta table tennis academy is working. We’ve built a close-knit family of players who work hard and share a passion for the game, and their belief and enthusiasm drives us on towards our next goals.