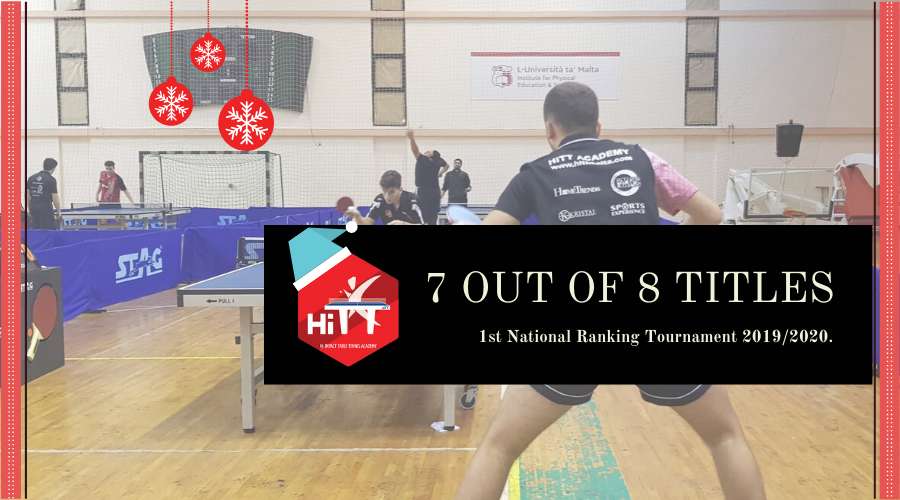 With the 1st National Ranking tournaments over, here at HiTT Malta Table Tennis Academy we have even more reasons to celebrate this Christmas. Our players swept the board in 7 out of 8 events, collecting a total of 7 gold and 7 silver medals! How festive is that?

The ranking tournaments consisted of Junior events (played between Monday 9th and Monday 23rd December) and of Seniors events (played between Friday 20th and Monday 23rd December). HiTT players taking part in these events put their hearts into every shot, with star performances from all our students. We are super-proud of them and the results they brought home are clear proof that the HiTT secret recipe works!

Our medals at a glance:

The Junior national ranking tournaments for the new MTTA season kicked off on 9th December 2019 with an energetic Under 11 competition and a nail-biting Under 15 knockout.

In the U11 competition, our youngest players battled it out in some tough encounters with Jacob Cilia managing to reach the quarters.

In the U15 event, Luke Bonello grabbed hold of the gold medal after prevailing over Anthea Cutajar in an amazing 3-2 final full of tense action.

In the Under 18 Ranking Tournament, Conrad Puli and Sean Debono met in the final after beating Aidan Dwight Mallia and Rachel Mifsud respectively in the semi finals, with Conrad grabbing the gold medal in a clear victory.

In the Plate Event, Paul Cordina reached the final and claimed silver after a 0-3 loss.

In the Juniors Doubles Main Event, this time Sean Debono & Conrad Puli played together to reach the final and defeat Aidan Dwight and James Vella Vidal in a 5-set match full of amazing rallies.

On Friday 13th December, 4 HiTT players made it to the semifinal stage of the U21 event, with Liam Wells facing Isaac Grixti and Conrad Puli up against Gabriel Grixti. Gabriel Grixti claimed the U21 title after winning 3-1 in the final against brother Isaac Grixti.

The Seniors events unfolded over 2 exciting nights, starting on Friday 20th December 2019 with the Seniors Qualifiers stage and the Seniors Doubles competition where Brothers Gabriel & Isaac Grixti claimed the title.

The Seniors Singles Knock-out unfolded on Monday 23rd December 2019. For the second time during these competitions, we had 4 semi-finalists from HiTT Academy in one event, this time in the Seniors Singles tournament. Our Head Coach Mario Genovese faced Gabriel Grixti in the first semifinal while Conrad Puli challenged Isaac Grixti.

The 5-set final match was played between Gabriel Grixti and Conrad Puli, with Conrad taking the first two sets and then Gabriel making an incredible comeback to win the next 3 sets in a row.

In the Seniors Doubles Plate, Luke & John Bonello made it to the final but lost 1 – 3 to claim the silver medal.

A big round of applause to all HiTT Players and all the best for Christmas and the new year🎄👏🏓. We’ll return to our tables in January to focus on the National League, where our top team is still undefeated in the 1st Division. Onwards, upwards and HiTTwards!